For the first time in history, the Guitar Foundation of America will hold the final round of the International Concert Artist Competition live on two continents in October 2021.
In order to accommodate international travel restrictions, our two North American based finalists, Bokyung Byun (South Korea) and Xu Kun (Alan) Liu (Canada), will compete in Los Angeles at Loyola Marymount University on Friday, October 22nd, hosted by Martha Masters (2000 GFA Winner); and our two European based finalists, Lovro Peretić (Croatia) and Marko Topchii (Ukraine), will compete in Brussels at our school, the Koninklijk Conservatorium Brussel, on Sunday, October 24th, hosted by Antigoni Goni (1995 GFA Winner).

These performances will be held in the presence of a live audience, and will be recorded for deliberation by our distinguished jury. The entire final round with all four competitors will be streamed via GFAtv on Sunday, October 30th to our international audience, and will conclude with the announcement of the winners. For those interested in attending the live performances in Los Angeles or Brussels, keep an eye out for details on how to secure your seat in the hall to be a part of history in the making.

We congratulate and thank all of our competitors for their perseverance and flexibility throughout all the rounds, and as we have made arrangements for this unusual final round. The GFAtv premier of the finals will include behind the scenes footage which will enable viewers to have unprecedented insight into the entire process, as we enjoy performances from four of the world’s finest emerging classical guitarists. We look forward to celebrating their artistry and resilience with you in October!

This competition is to close the 6 Strings Festival.

HERE for students and professors, whether or not connected to the KCB.

HERE for other audiences.

We hope to welcome you all in a pleasant and safe way. The KCB will therefore be using the Covid Safe Ticket for this event.

Because we hover somewhere between the education and culture sector and are also located in Brussels, it is not easy to map out these guidelines, furthermore the measures can change soon. We will try to inform you as precisely and quickly as possible.

Thank you for respecting these guidelines, so that we can continue making music. 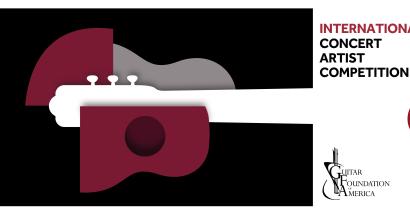 10:00
The Creative Process: Improvising, arranging and composing for the classical guitar in a solo and chamber music setting. Led by Antigoni Goni.

10:00
The Creative Process: Improvising, arranging and composing for the classical guitar in a solo and chamber music setting. Led by Antigoni Goni.

10:00
The Creative Process: Improvising, arranging and composing for the classical guitar in a solo and chamber music setting. Led by Antigoni Goni.
Meer evenementen